Most obese teens remain obese as adults, and adults who were obese as teens are unhealthier than those who become obese later in life.

The researchers compared results from two studies of gastric bypass surgery in 161 teens and 396 adults who had been obese since they were teens. Three years after their operations, both groups had lost between 26% to 29% of their weigh and Diabetes went into remission in 86% of teens and 53% of adults diagnosed with the disease before surgery. High blood pressure was also normalized in 68% of teens and 41% of adults.

Although a 2% mortality accompanied surgery in both groups, two of the teens died from drug overdoses, suggesting substance abuse and self harm may accompany teen obesity.

The researchers documented the durability of clinically meaningful weight loss and metabolic improvements and weight-related quality of life among adolescents who underwent gastric bypass surgery or sleeve gastrectomy. The benefits of these current bariatric surgical alternatives must be viewed in the context of the risks of nutritional deficiencies and the possibility that future surgical procedures will be needed in some patients.

It is this author’s hope that Endoscopic Visceral Lipectomy, which does not expose the patient to the nutritional and surgical risks inherent in bypass surgery or sleeve gastrectomy, may prove equally effective and a safer minimally invasive intervention for this younger population (Uncoiling the Tightening Obesity Spiral. Cucin RL Clin Res Diab Endocrinol:1(2):1-5 (2018)). 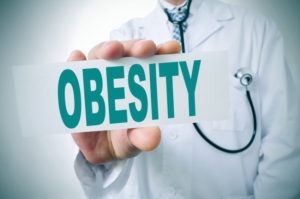 There is an underlying pattern of racial and ethnic disparity.  Almost half of Hispanics and blacks are obese with obesity rates for 2015-2016 of 47% and 46.8% for adult Latinos and non-Hispanic blacks respectively.

Obesity is most readily defined by Body Mass Index (“BMI”) which takes a person’s weight in kilograms and divides it by their height in meters squared.  For adults, those with a BMI between 18.5 and 24.9 are considered to have a normal weight.  A BMI between 25 and 29.9 is considered overweight and anything above 30 is deemed obese.  The NIH provides a calculator for you to determine your own BMI.

It is apparent to anyone following these statistics or even just walking down the street that current efforts to control the obesity problem have failed to reduce obesity rates.

We have learned that visceral fat or “belly” fat within the abdomen hijacks the metabolism by secreting the cytokine resistin.  This cellular hormone antagonizes insulin, blocking sugar from entering cells or reaching the brain.  It saps energy, shuts down the metabolism, causes brain fog, and hunger.    Cellular hormones are secreted directly into the portal circulation and the body’s protein factory, the liver, is commandeered to produce bad lipids which cause strokes and heart attacks.  Mesenteric fat thickness is closely correlated with carotid intimal narrowing.  Belly fat doesn’t just shorten your life, it reduces its quality with sleep apnea, gastric reflux, type 2 Diabetes mellitus, heart attacks, strokes, autoimmune diseases, and cancers.

New technology facilitates a new approach to the problem.  Rather than just starving this belly fat and letting it remain in place as do current bariatric surgical alternatives, removing it this visceral fat in a minimally invasive procedure may prove to be a simpler, more direct and permanent, safer and highly effective alternative.  Endoscopic visceral lipectomy could be just be what the doctor ordered.   It is clearly time to seek new approaches and fresh solutions as obesity rates continue to rise.

The shift to Western-style  processed food and sugary drinks is contributing to a new epidemic of diabetes and heart disease, chronic illnesses that are fed by soaring rates of obesity in places that struggled with hunger and malnutrition just a generation ago. 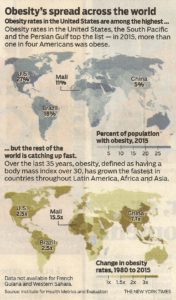 The U.S. has been too successful at countering the world’s hunger and malnutrition problem with cheap high-calorie food.  Indeed, it might be said that one of the U.S.’s  major exports is obesity.

Classic advice for avoiding hyperglycemia and obesity is to eat healthy foods with vegetables, fruits, whole grains, and beans which are high in fiber.   Include foods in your diet that are low in fat, such as low-fat dairy (milk, yogurt, and cheese), fish, and lean meat and limit foods that are high in calories and sugar, such as sweet desserts, potato chips, and candy.  The latter comprises a signficiant portion of our exports.

Alas, a Western diet brings with it the health problems of the Western world.