While an underweight prevalence was once more than double that of obesity, now more people are obese than underweight.  Obesity is one of the leading causes of preventable death in the world. There are an estimated 2,100,000,000 obese people worldwide and that number is forecast to grow to 51% of the world’s population by 2030.  Escalating obesity-related disease costs threaten to bankrupt the world’s healthcare systems.

The author reviews some of the causes for the increasing prevalence of this disease, identifies opportunities to intervene to prevent its progression, and discusses possible methods that may avert further increase in the overall prevalence of obesity in the general population.

2,100,000,000 people or nearly 30% of all people about the globe are obese with the U.S. population being the most obese.  Not one country has achieved success in reducing obesity rates.1 Although some models suggest leveling off may limit the prevalence to a more modest 42%, linear trends forecast 51% of the world’s population is forecast to be obese by 20302. Obesity related diseases include gastric reflux, sleep apnea, hypertension, hyperlipidemia, autoimmune diseases and cancer, heart disease, strokes, and most significantly type 2 diabetes mellitus.  In a report published November 20, 2014, McKinsey Global Institute estimated worldwide annual Obesity related disease costs reached $2,000,000,000 and are forecast to grow by 9.6% annually to $17,000,000,000 in 2030, threatening to bankrupt national healthcare systems.

In the vast majority of circumstances, diet and counseling are less successful than weight loss surgery as long-term solutions3,4 and successful treatment requires a multidisciplinary approach.5 However, in spite of the increasing obesity problem, the number of bariatric surgeries performed annually remains limited to a very small portion of the afflicted population.

Established surgical options are either restrictive or bypass in nature.  These surgeries involve cutting into the bowel, rearranging the body’s alimentary plumbing or leaving behind a foreign body to force the patient to eat less or make food wind up in the toilet incompletely digested, with potential of creating nutritional cripples.  The number of bariatric surgeries has plateaued with annual costs exceeding $1,500,000,0006 and was estimated at approximately 196,000 by the American Society for Metabolic and Bariatric Surgery for 2015 with Roux-en-Y and gastric banding losing popularity in favor of gastric sleeves.  They reported revisions have more than doubled between 2011 and 2015 and comprise almost 14% of all such surgeries.  The low plateau evidences patient and physician dissatisfaction with the costs, risks and long-term sequelae of current surgical options. END_OF_DOCUMENT_TOKEN_TO_BE_REPLACED

AP (3/8/17) reports that fewer obese people are trying to loose weight than in prior years and researchers wonder if fat acceptance could be one of the reasons. Given enlarging meal portions, mainstream plus size models, re-scaling of clothing sizes, and popular overweight leads in sitcoms, the hypothesis seems not just tenable but proven.  The frequent inability of patients to keep weight off after losing it with diet and exercise, or sometimes even after bariatric surgery undoubtedly contributes to this shift.  It is not at all unlikely that the political correctness to avoid the subject of weight also prevents some of the peer pressure that might conceivably reinforce the dieter’s decision to pass up that extra French fry.

Some studies have implicated some infections that could be partially behind the obesity epidemic.  Researchers have found evidence to suggest  that infection with the common Adenovirus-36 leads the body to create more and fatter stem cells.    This observer concludes the AP report alone suggests that Obesity is at least socially contagious because the increased prevalence of Obesity has already spurred a change in social mores.

Obesity is not the morbidity itself though it does create a cardiovascular load, mechanical stress on the joints, and promote sleep apnea and gastric reflux.  There are some healthy obese patients, mostly younger patients who exercise regularly, who haven’t yet developed metabolic syndrome or who are genetically gifted not to do so.  The Public Enemy #1 is the Type II Diabetes associated with the metabolic syndrome which frequently complicates Obesity.  There are an estimated 29 million Type II Diabetics in the U.S.  Type II Diabetes is the leading cause of kidney failure needing dialysis, the most frequent indication for non-traumatic amputations, and a leading cause of blindness.

As it is the visceral or “belly fat” within the abdomen which secretes resistin, a cellular hormone which antagonizes the body’s own insulin to cause Type II Diabetes, reducing the size of that noxious cytokine factory which functions as a life-shortening gland with Endoscopic Visceral Lipectomy (EVL) is a direct approach to the problem.  Incidentally, the patient might cinch his or her belt a notch or two right off the operating table and is expected loose a great deal of body weight afterwards.  But the restoration of normal metabolism and amelioration of Type II Diabetes is the immediate goal of the procedure.  Though less attention by patients to their weight is not at all a pleasing finding for physicians, it does suggest the public has already recognized the need to retarget our emphasis!  EVL does so.

Reuters reports there are 2.1 Billion people suffering from obesity about the globe and obesity related disease costs exceeded $2 Trillion USD in 2015.  McKinsey 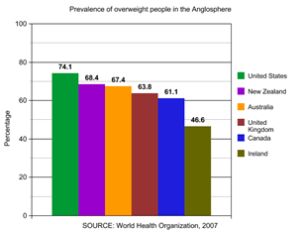 Global Institute forecasts the obesity market to reach $17 trillion USD by 2030 when half of the population is forecast to be obese. These obesity-related diseases include sleep apnea, gastric reflux, hypertension, autoimmune diseases and cancers, vascular disease, heart attacks and strokes, and most importantly type 2 diabetes.

The W.H.O. reports that the U.S. has the highest overweight and obesity proportion in the Anglosphere.  Over 2/3 of our population is overweight and 43% is forecast to be obese in a few years. 43% of blacks and Hispanics already are!  An individual’s lifetime costs of obesity are estimated at $92,235.   80% of type 2 diabetics are obese as obesity is the leading cause of type 2 diabetes.   Diabetes mellitus is the leading cause of renal failure needing dialysis, a frequent cause of blindness, and the most frequent indication for amputations. Obesity doesn’t just shorten your life, but it lessens its quality.